on March 24, 2021
Daniel Goleman's book - Emotional Intelligence was released in 1995 and ever since, EQ or Emotional Quotient has become a benchmark to measure success in different parameters of life
(Caveat : Success itself is a subjective term, but to keep it simple, here's my definition - If you are spending 90% of your time doing what you like and want to do and roughly 10% of your time doing things you "have" to do, you are a success in my opinion)
Here are a few things we know in general.
High IQ leads to increased self awareness that leads to High EQ. So a balanced combination of High IQ and High EQ is a great combination to make you successful in life.
Let's take a case study of Oprah Winfrey the famous talk show host and by all measures a very successful person.
We know Oprah came from a very poor background. She was born in extreme poverty and had a violent childhood. And yet she made it big.
Before we go further on Oprah here's a very interesting picture for Self Awareness - also called the Johari Window. Let's read this first 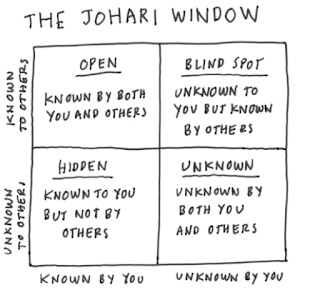 Its pretty self explanatory but the simple way to look at this Johari Window is that if you remove as many blind spots from your personality as possible your self awareness will increase and will pave for a more successful path for you.
So how did Oprah build self awareness. She probably build on her experience as she struggled through her early days in the media.  Here's how her career path looks like
All her experience, good or bad, growing up through those rough neighborhoods, helped her build awareness and perseverance. And more importantly she took the feedback and put a light on those blind spots. Today she's living a life she defined herself and calls the shots.
America is a land of opportunities. But not all use that to their advantage. Oprah did. She found her niche and she took baby steps, she took calculated risks, she made bold moves but more importantly she never took her eyes off the prize.
And that cannot be possible without a high Emotional Quotient.
If Oprah Winfrey with the tremendous baggage of background can make it, we really do not have an excuse.
I will end this with quote from Margarette Thatcher - I started with two advantages : no money and great parents
motivation

Why 'LKY' is my favorite politician

We all hate politicians don't we? I have never seen a friend, acquaintance or a family member tell me "they love politicians."  And yet there are a few politicians I like and admire. Also I feel being a politician is not easy. You have to have a thick skin and have the ability to take it on the chin. There's one politician who I admired the most. His name was Lee Kuan Yew . He was the Prime Minister of Singapore for more than 30 years. Though he was often criticized by some intellectuals as a 'political autocrat', what he achieved for Singapore is beyond remarkable. Let's get into some history - In the mid 60s Singapore was still part of larger Malaysian nation after the British left them in that state. They were a poor nation largely dependent on resources and help from the big brother Malaysia. Malaysia was largely a Muslim nation while Singapore was mostly Chinese and Buddhists. Singapore got separated from Malaysia just two years after the union was fo

Slow is smooth; Smooth is fast

Part of my current job is to guide various internal customers in my organization and help them achieve complete end-to-end automation of their product from inception to release to market. Goes without saying this requires deep understanding of their use cases, custom designing their processes and figuring out how to fit multiple tools in larger landscape of the Automation ecosystem. Of course all this requires time. If we rush into this, there's a 100% chance it will fail and we will have to keep coming back to it again and again. Which essentially means slowing things down in the long run. In larger scheme of things, I explain my clients that if we front-load our time focussing and getting our design right, we can execute real quick. But if we rush into this, we will end up with a bad design and may never complete the project and get to its logical end. Some like what I tell, some don't. But a part of my job is to set the right expectations with my customers. There are certain

During the World War II, the US Navy was facing a rough situation. Many aircrafts used for bombing the enemy - called Bomber planes - were being hit in-flight from the enemy lines. And the Navy had no idea how to reduce the casualty. The US Navy started analyzing where exactly and at what specific areas of planes were being hit based on the bullet holes they found on the returning planes. They realized that most of the damage was on the wings of the aircraft and the central body. The surviving planes rarely had damage on the cockpit, engine or tail portion of the planes. They concluded that the wings and the body should be reinforced with extra armor and thus reduce overall casualty. But a mathematician named Abraham Wald had different ideas. He told them they were interpreting the Data wrong. "Dead man don't tell tales"  Instead of checking the surviving planes damage, they should consider planes that have never returned. Those planes probably would tell a different st